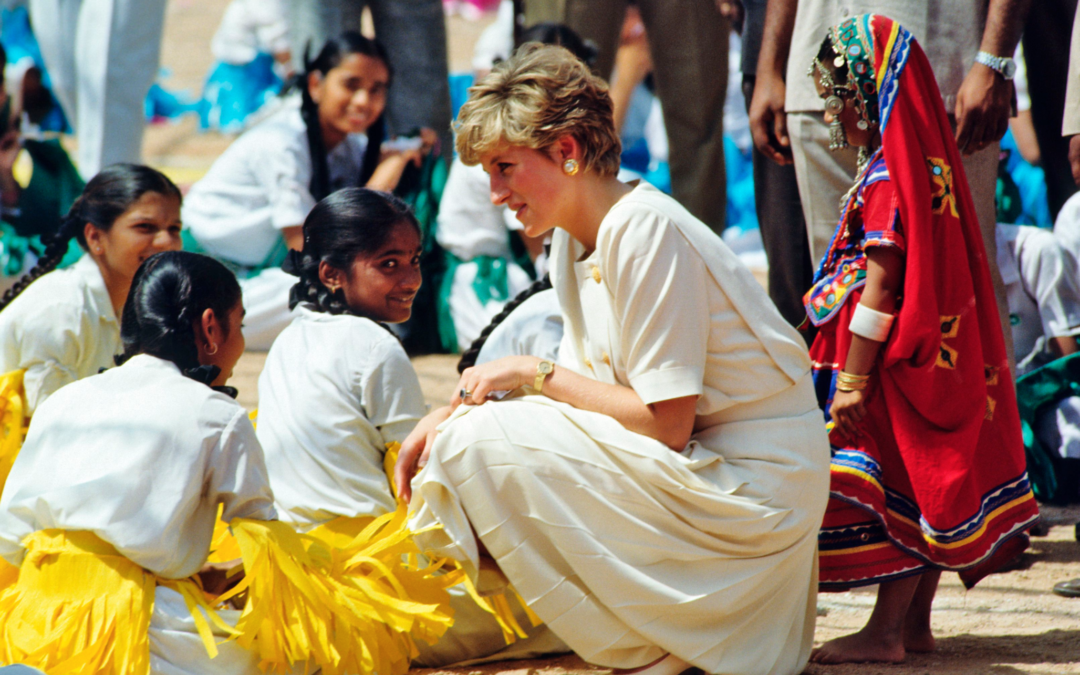 It’s hard to believe that August 31, 2017 marks the 20th anniversary of Princess Diana’s tragic death. She was a princess who made a difference to millions of people landing her the title The People’s Princess after her death. Her influence has stuck with me as a designer, but more importantly as an individual.

Crowds lined the streets of London on July 29, 1981 to watch Prince Charles and Princess

Diana kiss on the balcony of Buckingham Palace on their wedding day, while I was among the estimated 750 million viewers who watched the fairytale wedding live on television from the comfort of my grandparent’s home just outside of London. I decorated their windows with pictures of the couple days prior as the UK prepared for this once-in-a-lifetime royal wedding. I watched the whole event unfold with wide-eyed anticipation and was in awe of the magical making of a princess.

As I grew up, I continued to be fascinated by Diana. She was more than a fashion icon and royal presence.  She was a soulful, compassionate woman who sought to make a difference in the world, even as her own world was crumbling around her. Despite her public divorce and the incessant badgering of the paparazzi, Diana lived life with a purpose for serving others and lending her efforts to change lives. She left a legacy that, even 20 years later, has not been forgotten.

We all have something or someone who inspires us, but not many of us are brave enough to act on that stirring in our soul.  Diana inspired me, but I didn’t know how I could ever make the kind of difference she made in people’s lives.

I was recalling a project JAI designed a few years back. Several projects stand out as touching the lives of others, but one in particular remains an all-time favorite because we were able to really step outside the box. It was the Residence Inn in Scottsdale, AZ.

The hotel was built on the grounds of the Mayo Clinic, which is known primarily for its transplant center; therefore, patients and their family members routinely have to stay close for some time after their transplant. In addition to the guestrooms and public areas, JAI was able to create an area on each of the 4 floors of the hotel that would serve as a special room for guests connected with the hospital.  The four rooms were:

A Quiet Room: Created for guests who may want private time with family outside of their room, but not in the open lobby.

A Kids Room: Designed to be a bright and fun place for parents and children to spend time together playing and just being kids.

A Teen Room:  Planned perfectly to appeal to a teen’s need for independence and games.

A Small Boardroom: Crafted as a comfortable place to work or schedule a private meeting.

We knew this project had to exude peace, healing, and calm from life’s storms.  We treated each room as if it were an oasis.  And that’s what they became.  A life-changing respite for weary, often sick, travelers in need of comfort and a sense of normalcy.

More recently, JAI experienced the power of such rooms first-hand as we walked with our own designer, Karl, through his battle with cancer.  As friends visited Karl at Hope Lodge on the grounds of Tampa’s Moffitt Clinic, we saw the peace it offered him as he recovered from his grueling stem cell transplant in this beautifully designed transition to home. It stirred a fire in the JAI team to design more hospitality spaces that support this crucial need.  We are passionate about projects that provide us with an opportunity to impact the lives of others.

As designers, we could minimize our role to “the people who make spaces look pretty”. Instead, JAI is committed to going beyond the surface to create Design that Makes a Difference.  We are inspired to use our gifts to do exceptional design work that impacts lives and leaves a legacy.

I am going to pull out my Princess Diana keepsakes this week and remind myself again what it’s worth to be brave and dream big. What it’s worth to hold tight to my values and my inspiration.  No one needs to wait for a crowning moment to walk into the greatness we all have within us. We just need to take the next step forward.